“Sierra driver still has plenty to play for” – by Ross MacKay

With the value of similar Ford Sierra RS500 Cosworth’s Group A race cars going up and up – seemingly by the day – I had to ask the Motueka-based owner of one of the few still in regular track use, Brett Stevens, the obvious question… should the ‘right’ offer ever come along, would he contemplate selling his distinctive yellow ex Kevin Waldock/Playscape Racing machine?

To be fair, Brett – who runs a garage and salvage business in his hometown tucked away at the top of the South Island, and who is a regular and very popular competitor in the local Archibald’s Historic Touring Car Series – did give the subject some thought, all however, of a couple of seconds, before coming back with an unequivocal….No!

“Not now,” he said, as I wrapped up our – fascinating – conversation about the car and Brett’s now 24-year term as owner and custodian. “There’s too much of me wrapped up in it now. So no, I don’t think I’ll ever sell it. And when my time is up, I’ll pass it on to my boys.”

To say that the distinctive be-winged two-door Sierra RS500 Cosworth is one of – if not THE – poster car of what history records simply as ‘the Group A era’ of Touring Car racing around the world is an understatement.

While the advent of Group A did, indeed, welcome a return to production-based silhouettes and track widths, the ‘win-on-Sunday-sell-on-Monday’ ethos that prevailed at the time meant that companies like Ford, BMW, Nissan and Holden grabbed the opportunity to showcase key models in various Touring Car title series around the world with both hands.

The timing of the move – 1982 – could, in fact, hardly have been better for Ford, the company finally replacing the iconic Cortina with the all-new (and not universally liked) Sierra in October of that year.

The smooth, aerodynamically efficient (wags at the time compared the new look to that of a jelly mould) curves were not to the immediate liking of private and/or fleet buyer alike, and Ford needed to do something – and fast – to stimulate demand.

These days some bright spark in marketing would no doubt suggest ‘aligning the car with a social media influencer.’

Fortunately, times were simpler back then, Ford very much the pioneer of adding some sporting value to an otherwise mundane ‘family’ car via limited edition ‘homologation specials’ – think Lotus Cortina and Shelby Mustang – built in collaboration with a performance-oriented partner.

Ford’s then motorsport division boss, Stuart Turner, was already – apparently – casting around for a new ‘base’ model to replace the Capri, and long-time competition-partner Cosworth had recently presented a normally-aspirated DOHC/16-valve (YAA) version of the 2.0 litre ‘Pinto’ engine to company bosses.

Which was all very well. But what if, Turner asked, Cosworth add a turbocharger? What sort of power figures would you be looking at?

“(At least) ‘150kW in production (street) form, and very much ‘how much do you want? (which can be translated to ‘over 400kW (550hp) if you’re talking about a race car, came the reply, which must, indeed, have been music to Turner’s ears. Particularly when, in April 1983, he and his team locked in the Sierra as Ford’s next big racing project. 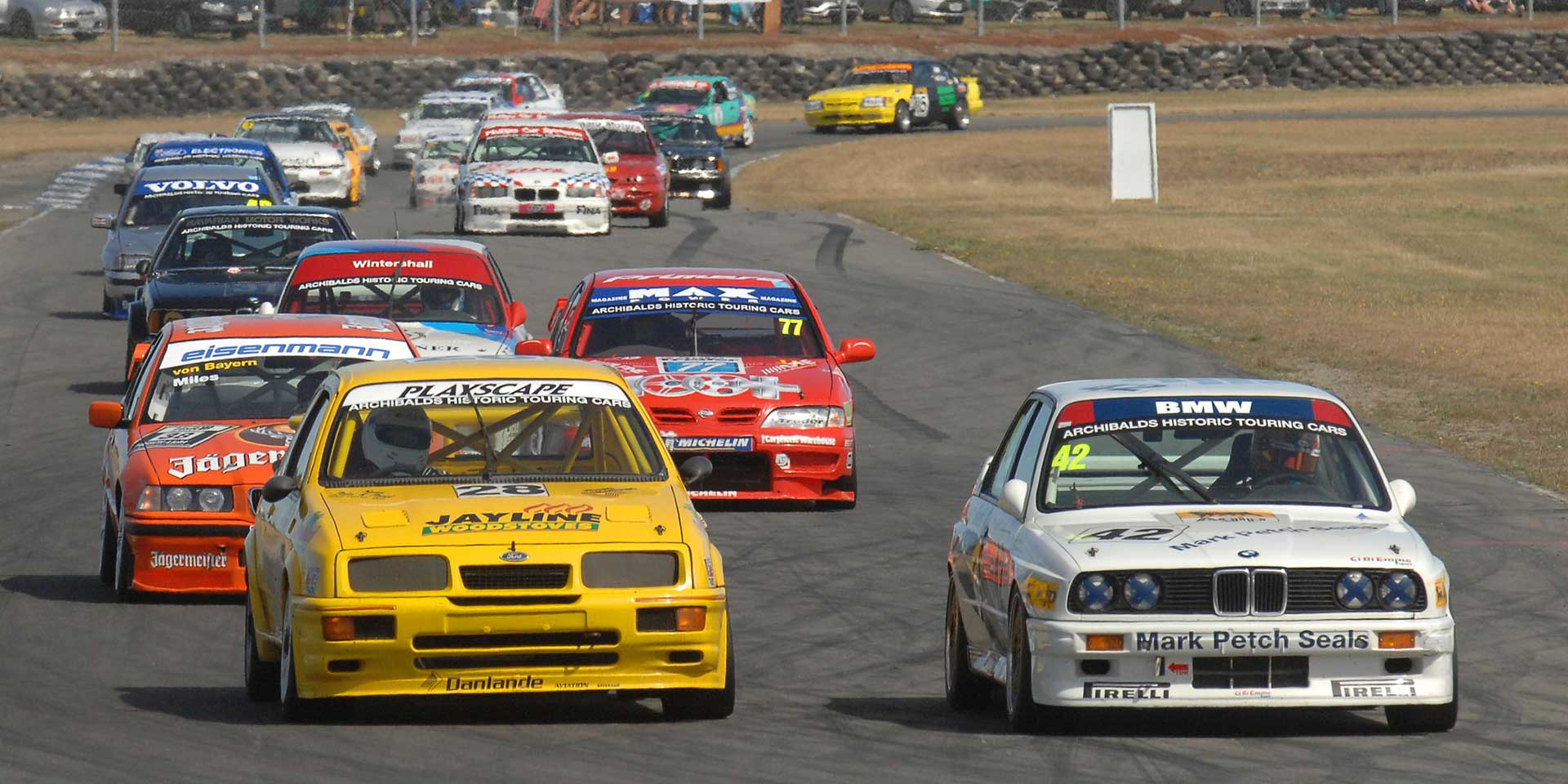 Under the new Group A rules Ford needed to build 5000 of the new Sierra Cosworths, with 500 reserved for later upgrade to competition-ready RS500 (hence the name) spec. by contractor Aston-Martin Tickford.

The distinctive ‘look’ of the Sierra Cosworth, with its large rear ‘table-top’ ‘wing,’ large rectangular hole in the otherwise smooth, colour-matched ‘grille; and subtle but effective front spoiler/wheel arch/side skirt combination, was the work of designer Lothar Pinske, a talented German who would go on in years to come to the job of director of Ford’s motorsport division.

Though it stuck out like the proverbial sore thumb the huge rear wing, mounted half-way up the rear hatch at what effectively was the driver’s rear-view eyeline, was there to counter the ‘significant’ lift the rear hatch produced at racing speed.

That it did its job (providing downforce) was not the issue, what was, was the way it looked. Fortunately, Pinske insisted on it staying, and now it is arguably the key to the car’s – be it as an Historic racer, or now uber-collectible road version – visual appeal.

All 5545 models eventually manufactured by Ford were assembled (in RHD) in the company’s Genk, Belgium, plant, with the first going on sale in July 1986.

The 500 ‘RS500’ models on which all the different racing versions like Brett Stevens’ ex Kevin Waldock car are based were culled from the original build programme as demand dictated and packed off to specialist coachbuilder/tuner Tickford’s performance division in Coventry in the UK where a new, more powerful engine was fitted and – amongst a number of other changes – a second (lower) rear spoiler was added at the base of the ‘Cosworth’ car’s unique and model-defining ‘wing.’

The engine had a thicker-walled cylinder block, larger Garrett AiResearch TO4 turbo and larger (air-to-air) intercooler and in standard form produced 167kW (17kW more than the ‘base’ model fitted to the cooking version of the car).

To say that the Group A racing car – in its Sierra RS500 Cosworth guise officially homologated in August 1987 – was an immediate success, is an understatement

Sierra RS500 Cosworth’s claimed pole position at all the remaining rounds of that year’s World Touring Car championship and dominated four of them including the 10th, at the Nissan-Mobil 500 meeting round the Wellington waterfront circuit.

Earlier in the month Steve Soper and Pierre Dieudonne had provisionally won the James Hardie 1000 race at Bathurst, too, crossing the finish line two laps up on German Ford Texaco Racing (Eggenberger Motorsport) teammates Ludwig and Niedzwiedz. However, both cars were disqualified for what were considered illegally modified front wheel arches (which allowed the cars to run a higher profile tyre than other teams running new Sierras).

The decision to disqualify the two Eggenberger cars effectively cost the team the inaugural World Touring Car Championship title (to BMW E30 M3 driver Roberto Ravaglia). But it couldn’t stop the momentum teams running the cars around the world were building up.

One of those teams, Dick Johnson’s Shell-backed squad, went on to dominate the Australian Touring Car championship for the next two years. Sierra RS500 Cosworths also won the annual then Toohey’s-backed 1000km race at Bathurst in 1988 (Tony Longhurst & Thomas Mezera) and again in 1989 (Dick Johnson & John Bowe).

Which, for the purposes of this story, Australian explosives entrepreneur Kevin Waldock enters the picture.

A big crash in qualifying and losing boost thanks to blown turbo hoses meant the pair had a wretched weekend, eventually retiring with a split engine bore.

Waldock on the other hand was entranced by the whole ‘mountain’ experience and pretty much straight away resolved to be in a car – a Sierra – of his own in the next year’s race.

He didn’t do things by halves either, initially contracting Miedecke Motorsport to build and run a second Sierra under his own Playscape Racing banner.

As it turned out Miedecke had another up and down (or perhaps that should read ‘down and up’) year, and with his own car burnt out at the third round of the 1989 Australian Touring Car Championship series at Lakeside, he was forced to commandeer Waldock’s for the remaining ATCC rounds and commission a third for his contracted driver.

That car is the one Stevens now owns and was debuted in its distinctive yellow Playscape colours at the Pepsi 300 endurance race at the Oran Park circuit near Sydney in August that year.

History records that Waldock and co-driver Brian Thomson failed to finish the race, won – somewhat ironically – by Miedecke and his regular running mate, Kiwi Andrew Bagnall, in what effectively was Waldock’s ‘first’ car.

Bagnall was not the only Kiwi with strong connections to Miedecke Motorsport and the team’s various Sierra RS500 Cosworth though. The car Brett Stevens now owns, and drives is the third to be built and initially maintained by none other than the Stone Brothers, Ross and Jimmy.

In fact, when Andrew Miedecke decided to close Miedecke Motorsport and join Peter Brock at Mobil1 Racing, Waldock set up his own operation on Queensland’s Gold Coast with personnel which included Ross and Jimmy.

Ross then ran Kevin in the yellow Playscape card in selected rounds of the Australian Touring Car championship in 1990 and 1991 with best finishes in 1991 (sharing the car with Mike Preston) of 3rd place in the Sandown and 5th at Bathurst.

Not bad for what effectively was a self-funded privateer team but that – as it turned out – was pretty much as good as it got for Waldock and the Playscape Sierra thanks in part to a move by the organisers of the ATCC away from ‘turbo era’ cars like the Group A Sierra and Nissan’s ‘Godzilla’ Skyline BNR32 to normally-aspirated V8 Ford Falcons and Holden Commodores.

Which is where current owner Brett Stevens can finally take up the story.

“After running an NZ-built Group N Sierra for a few seasons I decided to go to Australia and look at several Group A cars that were for
Sale. This would have been back in the 1990s, 1996 to be exact.

“A friend of mine, Ross Hoare, was working at Tony Longhurst’s at the time and told me about Kevin Waldock’s car parked
at the back of the workshop of Playscape Racing.

“Ross took me to meet Kevin and initially he didn’t want to sell the Sierra.

“After some discussion, however, a deal was done and – along with a considerable spares package – a container was loaded, and the car shipped home.”

“It’s Ironic when I think about it now, but in the early 90s I was pit crewing for Ashton Wood at the Wellington Street Race and next to us in the pit garages was none other than Playscape Racing and Kevin’s Sierra, which he was sharing with Graeme Crosby.

“I remember commenting to my fellow crew mechanics that ‘If I owned that car, I would put an exhaust system on it that didn’t rattle!

“Several years later, of course, I was lucky enough to be able to purchase this very car and after seeing how well built the rattily exhaust actually was – due to the use of slip joints when it was originally built – I still haven’t needed to replace it. Not bad for a race car which has seen fairly regular use for coming up to 30 years.”